As I mentioned I have been reworking some of my old work and I have been focusing on Tank tracks today as it was something I really was never happy with on the original model.

Originally I had my tank tracks at 180 poly per side which doesn't hold all that much detail especially as the tank would be something you could come close up to so I have been trying to work out a way of making a better set of tank tracks and the solution is LOD.

So the high poly comes in at 1,180 million, the original low poly comes in at 180 polys and the reworked comes in at 11,500 polys. I'm happy with the poly count on the rework as doing a LOD model this frees up some poly space as it doesn't use up as much memory and gives me the ability to add in extra detail into the tracks. This is my only way of getting it to work as my poly budget was around 20k max now if I do a LOD this gives me the freedom to do more with it. I am also going to add in some extra polys on the low poly tracks too just to give it some extra detail it also bean the normals should look a lot better too.

My only problem left to work out is how to texture them I'm thinking of doing it in sections of 5 tracks each just to give some variation to tank tracks and them not to all be the same. 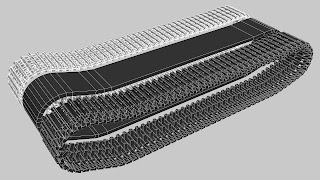 A reworked model! I did the original work about 2 years ago gone back over it and cleaned it up a little more the plan is to rework the low poly model too and get some nice new textures on the go. It will be nice to be able to see how much I have improved I'll do a comparison once I'm all finished! 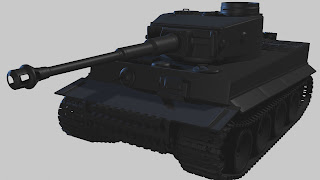 It has mostly been poly clean up and its nice to finally get back to some personal work =]
Posted by Unknown at Saturday, August 03, 2013 No comments:

Creating a modular character for UT3

I'll start working on a document later today and post it once i'm back from holiday but i thought i should give a teaser to what the work flow has been and the limitations to the work and research leading to the final design.

So being that you get to pick what you want your dissertation to be i went with recreating an art style within an engine and making a modular character from concept through to final model. The art style i went with was Runescape as they have an interesting per polygon colour style with a projected texture overlay i thought this would be an interesting challenge to recreate. 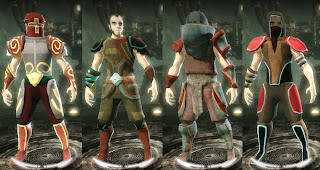 Here are the characters, they are fully modular so the player would be able to chose which parts they want.
Posted by Unknown at Thursday, June 13, 2013 No comments:

I'm proud to announce that a small project i have been working on is now finished and uploaded to new grounds!

So i have still been working on my Dino its not yet final as there is a bunch of errors with the model and the smoothing groups didn't want to work on this particular export of the dino not sure why though... something else to fix!

I will show the materials and textures once i finish it finally hopefully by the end of this week! then i can get back to dissertation work.

Its set up with a standard 3 point lighting in a big grey box because grey is the new black if you didn't know!..

As always any feedback is welcome!
Posted by Unknown at Wednesday, April 17, 2013 No comments:

So my last post i showed off the logo to a mini project i was working on over my weekends well i decided to just finish it over the past 2 days instead of working... kinda bad as i'm now more behind on projects but i'll catch up soon. had some feedback that has got me thinking a bit more about my dissertation but i want to work on my dino and get it finished! aiming for Sunday to finish off the dino so expect some animations of him soon! hopefully if i work out how to use UDK properly i will be able to upload a package for people to load in and get chased by him...

anyway as i want this blog to be a collection of my art and rather me posting point stuff here is the art side of things, this was a uni project that i did i'm not 100% happy with the renders i would like to do a few more of them from character model when i get time. 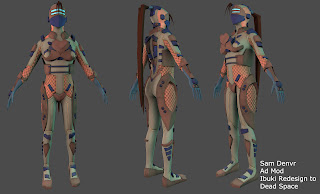 as always any feedback on my work is more than welcome!
Posted by Unknown at Tuesday, April 16, 2013 No comments: